Keshcorran, and the Caves of Kesh

23 Aug Keshcorran, and the Caves of Kesh

“Throughout time the mountain and its caves appear to have attracted the attention of humans in various ways, which has provided an interesting and multi-faceted story in how it might have been perceived over thousands of years.”

Drag within the image to explore The Caves of Kesh and the Keshcorran Cairn in virtual reality.

Setting out to explore the Caves of Kesh (or Keash), with the fairy-tale resonance in the name, always promises an afternoon of adventure. While the caves are hard to miss from the Ballymote – Boyle road (R295), especially when the last light of a summer’s day points them out like a beacon, they are a bit difficult to access. It is a steep climb up a hillside filled with stinging nettles to break your fall. But the view from inside Cormac’s Cave, or any of the other 16 shallow caverns along the ridge, makes it dramatically obvious how this location might have inspired the legends that surround it. An even more difficult climb, threading your way up beyond the caves, up through the gorse and heather, is required to ascend to the top of the hill, called King’s Mountain. At the top the Stone Age passage tomb of Keshcorran crowns the summit. 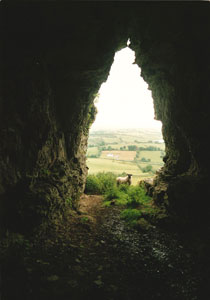 The view from the cave marked “F” in the diagram, below left.

In the virtual-reality environment to the left the view begins at a field at the bottom of the ridge, where the path leads up to the Caves of Kesh. From there you can follow the hotspots to ascend up to the northern group of the caves, and then explore the interior of the conjoined caves E and F. Or you may click the other hotspot to jump all the way up to the top of King’s Mountain for views of Keshcorran Cairn, locally known as “The Pinnacle,” and a panoramic view from its peak.

This is the highest point of the Bricklieve Mountains, at 359 m (1,178 ft). The spot is more easily accessed from Cairnaweeleen at the northeast side of the hill. The Keshcorran cairn, which is some 30 m (100 ft) in diameter, likely holds a never-excavated passage tomb within it, similar to those in the Neolithic necropolis of Carrowkeel 4 km (2.5 mi) away.2

The cairn was consructed on a stone platform, 35 m (115 ft) in diameter and up to 2 m (6.5) high (see satellite photograph, below left). While never excavated, it likely dates from the same Neolithic-Early Bronze Age period as the other cairns in the passage tomb cemetery today known as the Carrowkeel-Keshcorran Complex. It is at the northern end of a large mountaintop oval enclosure, 206 m (676 ft) by 168 m 551 ft) containing another smaller D-shaped enclosure at its southern end, which itself may have contained a smaller hut structure. This complex mountaintop site may once have served as an assembly location for prehistoric commemorations of those buried in the cairn.3

“Two cists, a cairn with cist, a possible hut site, a large bivallate enclosure, a section of pre-bog wall, a massive ‘megalithic’ wall structure and a wedge tomb are now known and suggest a ritual complex, spanning a time-frame from the Neolithic into the Bronze Age.” 4 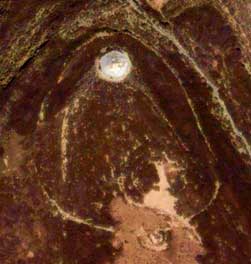 To the locals who live in the village of Keash below the caves, the hill is the stage for the annual festival held on the last Sunday in July, with sporting events, music, and dance, and maybe even a climb up the mountain. These Garland Sunday events are the modern continuation of the Lughnasa celebrations held here since antiquity.5

The systematic exploration of several of the caves in 1901 resulted in little evidence of very ancient human habitation. The excavators concluded that the caves were not used for human occupation earlier than the 8th – 11th centuries. The scant human remains, along with the great variety of bones found of the European Brown Bear and its prey species, led the explorers to wonder why these caves, appearing to be “so suitable in every way for human occupation,” contained no evidence of their ever having been inhabited. Perhaps, the explorers wondered, the evidence of the bears occupying the cave might explain the absence of early man?6

“On a clear day, looking out from [the interiors of the caves,] one encounters a magnificently extensive view -– all the lake-dotted fertile plain of southern Sligo, east Mayo, and Roscommon, and the Mayo highlands down to Achill, Croagh Patrick, and Maamtrasna, with Lough Mask and Lough Corrib gleaming in the distance. To the cave-diggers, the swift change of view from the dimly-lighted galleries to the glorious prospect that lay framed by the mouths of the caverns, was a never-ending source of delight.” 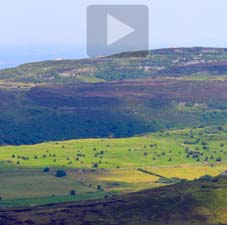 Click to enter a VR tour linking cairns on four Co. Sligo summits: Keshcorran, Knocknarea, and Carrowkeel Cairns F and K, where the tour opens. View full screen to use the interactive map.

In 1901, at the entrance to Coffey Cave, an armor-piercing projectile head with an iron socket was discovered. This may have been a crossbow bolt or another type of missile weapon from the 10th to the 13th century. Nearby at Cave O was found a human tibia dated to approximately the same period. Can there be a link between the two finds? One researcher has suggested the “tenuous possibility” that someone was injured in a battle, found refuge in the cave, and there met his demise.8

Among the scarce evidence of human remains, however, there were a number of human teeth found, along with the teeth of other species. One isolated adult tooth, recovered from the entrance to Coffey Cave, was radiocarbon dated to the early Iron Age (200 BCE – 30 CE). Other teeth found scattered throughout Plunkett Cave may be later, dated from the Early Medieval (460 – 670 CE). According to archaeologist Marion Dowd:

“Because the human teeth from these two caves are adult, and because of the almost total absence of other skeletal elements, it seems plausible that the teeth do not represent funerary activities or accidental losses. Rather, it is possible that they reflect some form of ritual tradition that persisted over several hundred years…A tantalising possibility is that the teeth may have been placed in the caves as part of ritual activities associated with the festival of Lughnasa.” 9

Lady Gregory in 1904 recounted one of the myths of the fairy mountain of Keshcorran. In this tale a hunting party, accompanied by the harper Corann set out from the palace of the Brú na Boínne (Newgrange) chasing after an giant evil sow that was causing destruction and death all around. It was the enchanting music of Corann’s harp that mesmerized the beast, allowing the warriors to slay it. Its massive body became the mountain of Keshcorran.

“And Corann was the best of the harpers of the household; he was harper to the Dagda’s son, Diancecht. And one time he called with his harp to Cailcheir, one of the swine of Debrann. And it ran northward with all the strength of its legs, and the champions of Connacht were following after it with all their strength of running, and their hounds with them, till they got as far as Ceis Corain, and they gave it up there, all except Niall that went on the track of the swine till he found it in the oak-wood of Tarba, and then it made away over the plain of Ai, and through a lake. And Niall and his hound were drowned in following it through the lake. And the Dagda gave Corann a great tract of land for doing his harping so well.” 10

Map of the Caves of Kesh. Transactions of the Royal Irish Academy, Vol. 32, Section B

The largest of the caverns in the Caves of Kesh is known as Cormac’s Cave, cave “P” in the diagram to the left. It was here, the story goes, that the most renown of the Irish high kings at Tara, Cormac Mac Airt was reared by the wolf who stole him from his mother. It is from this Cormac that King’s Mountain gets its name.

“Then Achta, when she had cherished her boy and rejoiced over him, bade her handmaid keep watch over both of them, and they fell asleep. But the maid’s eyes were heavy with weariness and long travelling, and ere long she, too, was overpowered by slumber, and all three slept a deep sleep while the horses wandered away grazing through the wood.
By and by there came a she-wolf roaming through the wood in search of prey for her whelps, and it came upon the sleeping woman and the little child. It did not wake the woman, but very softly it picked up the infant and bore it off to the stony cave that is hard by to Creevagh in the hill that was afterwards called Mount Cormac.” 11

This story may be read in its entirety here. 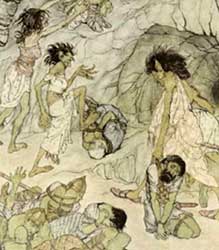 King Cormac may have been an actual historical figure at some time during the period from the second to the fourth century CE, although he is best known from the legendary tales in the 1627 Annals of Clonmacnoise, transcribed from earlier stories. The story of his birth and early years with the wolf was first put to parchment around 800 CE. Local folklore accounts ascribes the origin of the cairn atop the mountain as the burial site of the king’s daughter, and that “anyone visiting the site left a stone in her memory.” 12

Perhaps the most dramatic story, involving Fionn Mac Cumhail and his warrior band, plus fairies and witches, is called The Enchanted Cave of Kesh Corann. Fionn’s band, the Fianna, were hunting wild boar in the area, while Fionn was watching the hunt from atop the Keshcorran cairn. Unfortunately Fionn neglected to ask permission for the hunt from the Conoran, who ruled from the fairy palace inside one of the Caves of Kesh. Conoran then sent three witches – his daughters – to punish Fionn for the trespass.

The three sisters, called the “Hags of Winter,” set a trap to capture Fionn, and bound him with a magic cord that made his as weak as an old man. He and his warriors ultimately escaped after being rescued by an ally who beheaded the witches.

“They had not been long so when Finn and Conan reached the cavern’s edge, and so perceived the three hideous hags thus busied sit at its entrance: their three coarse heads of hair all disheveled; their eyes rheumy and redly bleared; their three mouths black and deformed, and in the gums of each evil woman of them a set of sharpest venomous and curved fangs…” 13

There is a story concerning a small cave in Co. Roscommon that is supposed to have a other-worldly connection with the Caves of Kesh. The Cave of the Cat, also known as “the Hell-Mouth Door of Ireland,” is part of the Rathcroghan Royal Site. In a 1779 diary entry, an antiquarian reported that the local people believed a woman was dragged by a roped calf into the cave. She ran after him there, but the calf kept dragging her further until the next morning she found herself emerging back into the light of day at the Caves of Kesh, 38 kilometers (24 miles) from where she began. In the virtual-reality environment (top left) you can click on a hotspot inside the cave to be transported into the Cave of the Cats. Dr. William Wilde (the playwright’s father) noted in 1880:

“This legend is still living among the people of the district, at least it was when as a boy I used to visit on a May morning the great Rath at Crohan, near the rampart of which the cave mouth is situated, and where all the great Connaught oxen of the extensive plains around were driven in to be bled, and the peasantry gathered in with pots, turf, bags of meal, and bundles of scallions to make possets with the warm blood…” 14