“The ruin is enriched with symbolic value, when a community retains a broken structure as a cultural treasure. The symbolic ruin is the meaningful monument. It brings to mind, or to soul, a value saved and hence vital. Such a ruin is no leftover of someone else’s world, a survivor of time, though out of place. Such a ruin cannot be interesting only for what it tells of the irrecoverable past, that life long dead. Nor can that ruin be of formal value only, indifferent to what it is and who we are.
The context goes beyond the physical and visual surrounds to the concern and attitude that govern the ruin’s preservation and presentation. The symbol looms larger than the stone. The ruin is greater than the site. It insists that we share insight.”

Robert Ginsberg, The Aesthetics of Ruins, 2004 1

Drag within the image to view Cahergal and Leacanabuaile Forts, and Ballycarbery Castle, in virtual reality.
There are nine different locations to explore. The tour begins at Cahergal Fort.

Cahergal and Leacanabuaile forts, ancient stone neighbors in the hills west of Caherciveen, are known in Irish as caiseal, in English “cashel,” a stone fort. It is a short leap linguistically to the Irish word for castle, caisleán. In local legend, the physical leap from Leacanabuaile to Cahergal to the stark ruins of Ballycarbery castle is a short one as well, as they are all reputed to be connected by underground passages.2 In the virtual-reality environment, hotspots rather than tunnels connect the two caisil with the remains of Ballycarbery castle close to the harbor. It is intriguing to consider that, along with the mythical tunnel, that there may have been a genetic connection, spanning the seven centuries that separate those who lived here, drawing together the families who resided in these three homes of long ago. Perhaps this connection is the “symbol looming larger than the stones,” in Robert Ginsberg’s phrase (top). 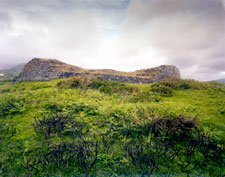 The oldest of these three monuments, Cahergal (the Bright Stone Fort) may have been built in the seventh century CE.3 The seven staircases ascending its inner walls are similar to those at Staigue Fort and the Grianan of Aileach. From the top of the wall the view extends down the hillside to the castle at the water’s edge. The reconstructed walls range from 2 to 4 m high (6.6 ft to 13 ft). At the base, these walls average about 5 m (16.4 ft) in thickness. The interior of the fort averages some 26.5 m (87 ft) in diameter. In this courtyard there is a circular beehive-hut like structure, about 7 m (23 ft) in diameter and about 2 m (6.6 ft) high. Earlier reports describe a second, rectangular, stone structure within the enclosure. But there now seem to be no traces of this, and it may have been a modern addition which was dismantled in the archaeological excavations and reconstructions carried out in the 1990s.4

The high-resolution photograph of Cahergal pre-restoration (right) was made with a large-format view camera in 1979. Click the photo, and then click the button at the right of the Zoomify toolbar to see it full-screen.

The fort figures prominently in the traditional tale, recounted by Sigerson Clifford in 1972, called “The Fairy Footballers of Cahergal,” in which the fairy football team from Cahergal lost a player and recruited the mortal Coneen Dannihy to play for their side in a game against the fairies of Staigue Fort. He was given a fairy gansey (jersey) to wear to mark his role as a member of the Cahergal gentry’s team.

“His mother, who was the champion knitter of the seven parishes, opened her eyes wide in wonder as she fingered [the gansey]. ‘Indeed,” she said, ‘the likes of it was never fashioned by anyone in this mortal world.’ And she looked at Coneen with a troubled eye for he was her only offspring, and rubbing shoulders with the Good People of Cahergal was something no wise man did lightly. [His mother arranged for Coneen to show up late for the next match, which greatly distressed Coneen, and his fairy sponsors.] …In the end he disappeared, and the following year he was found wandering and wild in Gleann na Galt, the Glen of the Madmen, in the Dingle Peninsula, where the people with queer minds go searching for the secret herbs that have the cure for madness in them. He was locked up then in the mind-hospital and once they put the poor man behind bars he lasted no length, and within a month he was under the earth, safe from peelers, landlords and fairies for all time.” 5

Another fairy story of Cahergal, recorded in 1912, concerns a cow in a pasture by the fort whose milk her owner thought was being stolen each night. He and some friends decided to spy on her “…one moonlit night, when to their amazement they saw it was milked by a fairy hare.”6

These legends, and others that surrounded such ancient monuments, helped to protect them from the designs of “improving” landowners. In the audio interview (below, right) Paddy O’Shea repeated the oft-heard cautionary statement: even if you don’t believe in fairies, you shouldn’t interfere with their property.

The more fully excavated (and more thoroughly restored) neighbor of Cahergal is only 375 m ( 410 yd) away. Leacanabuaile (the Slope of the Booley)7 presents in its interior a rather complete example of how such a cashel might have looked during its ninth or tenth century occupation. Objects recovered during its 1939-1940 excavation included tools and fragments of iron, bone, bronze and lead. Many of these may be seen in the gallery below.8 The reconstructed walls now reach from 2 m (6.5 ft) to 4 m (13 ft) high. The 2.5 m (8 ft) thick walls have a lintelled entrance in the east that opens into a central space of about 20m (65 ft) in diameter. The reconstructed buildings inside the fort include two small rectangular huts attached to the walls and a large rectangular hut of 44 sq. m (470 sq. ft) in the center. The excavator said of this structure,

“Great care must have been taken with the erection of this wall because as it stands today, its excellent finish would do credit to any tradesman.” 9

Four large post-holes found in the floor may have been how a thatched-timber roof was supported. This hut enters into a circular clochán-type structure with a diameter of 4.5 m (14.7 ft) that abuts the western wall of the fort. Between the two structures is the entrance to a souterrain, a roughly 1 m (3.3 ft) tall underground passage following a zigzag path for about 11 m (36 ft) into a chamber inside the fort’s wall, which may have presented an escape route to the outside.10 There is a second wall chamber on the opposite side of the fort (see the diagram, above left). This may be entered in our virtual reality tour, where the chamber connects to a modern opening on the western exterior wall of the fort.

In 1838 Lady Chatterton, who was touring in the area, saw this, or a similar subterranean passage, which her guide informed her led to another fort on the side of a mountain a half-mile away. When Chatterton remarked that none of the stones of these passages were removed for building purposes, she reported,

“‘Faix thin,’ said the old man, ‘it would be aisy enough to do that same ; but sure, there’s an ould spirit o’ the place, that do be always guarding every stone. It takes different forms, and maybe, ’tis in that big black crow, that’s perched upon the top of the stone this blessed minute, looking for all the world as wise as a Christian, and hearkening, perhaps, to every word we’re sayin, the Lord save us.'” 11 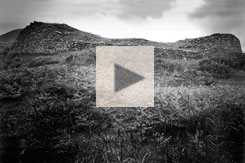 Paddy O'Shea explains what happened when a farmer tried to remove part of a fort (1979).

Leacanabuaile Fort was built atop a highly defensible rock eminence, commanding a clear view to the sea with steep-sided approaches on three sides. A well 137 m (150 yds) away provided a dependable supply of water. It has been described as

“…the homestead of an average ‘strong’ farmer of the 9th-10th century, perhaps indeed of a member of the [aristocracy] itself…The rectangular house presumably represents the common living room, and doubtless too the sleeping quarters of younger members of the family and of servants.” 12 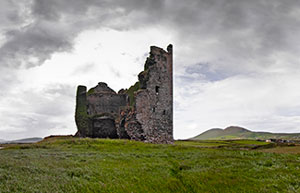 There has been a dwelling at the Ballycarbery Castle site from the end of the fourteenth century, although the ruins there today represent a sixteenth-century construction. The last people to live on the property left in the early twentieth century, when the home the Lauder family built, attached to a castle wall, was demolished. The ruins of this home, and some outbuildings, may be seen in the 1792 watercolor by Daniel Grose, below right. While tradition credits the building of the castle to Carbery O’Shea, it actually belonged to the Gaelic Lord of Desmond, the McCarthy Mór. The O’Connell family likely occupied it as his constables. In this remote part of the country, landholdings by the hereditary chieftains and their minions persisted until the eighteenth century. In the case of Ballycarbery, however, it is probable that Maurice O’Connell, last noted as an old man in 1641, was the last of the family to live in the castle before it was captured and blown apart by Parliamentary forces in Cromwell’s time.13 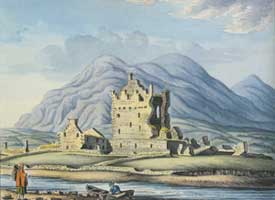 “It is now impossible to give any description of them, or of what is left of them, as by the demolition of the southeastern portion of the castle any staircases or means of approach that formerly existed have now been removed, and there is no means of ascent without peril to life.” 14

A legend about Ballycarbery Castle concerns the O’Connell family who were occupying the castle as constables for the MacCarthy Mór, the Gaelic Lord of Desmond. It seems that there was an obligation put on the O’Connells to send one of their children to the MacCarthys to be fostered there. The story holds that when the MacCarthy Mór had a messenger deliver an empty cradle to Morgan O’Connell for them to return with a child, the O’Connells killed the messenger and then sent his severed head back to MacCarthy in the cradle. As Sigerson Clifford takes up the story,

“You might say that Morgan wasn’t content with the safe path through the bog but had to stray from it and risk falling into a quagmire. In he fell right enough for MacCarthy Mór came with a big army and hanged him from the highest window, to learn the rest of the Connells a bit of sense, for they were still living in the castle one hundred years later when the Spanish ships were carrying trade to and from Valentia Island.” 15

The symbolic value of all these ruins, the cultural connectivity that may bind together the memories of those who lived in the two cashels with the O’Connells of the castle, was severely tested by the forces that pay no heed to such symbolic values. When a tenant removed part of the castle bawn walls (see photograph in gallery) it was a public outcry, recognizing the symbolic importance of the ruins of Ballycarbery, that brought the destruction to a halt. A 1910 story in the local newspaper reported:

“I have just been informed that portions of the fine old ruin near Cahirciveen—Ballycarbery Castle—are being demolished. It is difficult to believe that the remains of this ancient stronghold of MacCarthy Mór should be threatened with destruction in a district where many of the clan still survive; but, apart from such considerations, the preservation of these historic landmarks of the county is the duty of every Kerryman.” 16