Posted at 08:01h in Completed, Stone Circles by Howard
Share

“A Druidical temple somewhat resembling that at Stonehenge in size and structure…The place is called Baltony, a name not uncommon in some districts of Ireland. It is supposed to be a corruption of Baal tinné, the ‘fire of Baal,’ — intimating a spot where that Deity was particularly worshiped in Ireland…Among the rigid Presbyterians of the North, such remains of antiquity are lightly regarded because they are deemed remnants of superstition and idolatry, although some respect has been paid to them by its respected proprietors.”

Drag within the image to explore the Beltany Stone Circle in virtual reality.
Click the red hotspots to see all three viewpoints. Touch here for the HMD version.

The Beltany Stone Circle inspires, today as in 1841, much speculation regarding supposed supernatural associations and ritual practices. It is an outlier—and one with an outlier stone—among Ireland’s 240+ stone circles (five in Co. Donegal). It is larger than most circles; its 64 stones—the remnants of what was once a circle of more than 80—have a circumference of 137m (150yd). It sits atop the prominent 170m (350 ft) Tops Hill, and, most peculiarly, in the center of the circle are the remains of a cairn. Is it possible that this monument is not a late Bronze Age stone circle at all, but is actually the remaining kerbstones from a massive ruined burial cairn, or even a much earlier Neolithic passage tomb?2 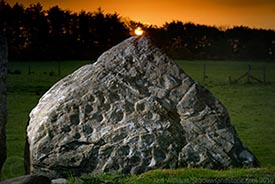 Bealtaine (May 1) sunrise over the cup-marked stone. (Photo: Ken Williams)

To add to the distinctiveness of this circle, a rather horrific-looking Iron Age stone head, only 25.5cm (10in) tall (see below right), was found in or near the monument, perhaps indicating that the site had a ritual use for many centuries after its construction. And certainly the name, “Beltany,”3 with its unmistakable resonance with the Celtic calendar’s fire festival of Bealtaine, or May Day,4 suggests that folk memory long considered the locale to be a center of ritual observance. The association with dimly remembered ritual is not unique to Beltany, nor is it unique to stone circles in Ireland. In Scotland, for example, some such monuments were known in the countryside as “Auld Kirk,” or “Sunken Kirk” (Church), perhaps evidence that the circles were thought to have a religious significance.5 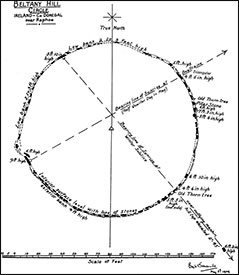 The romantic and mythic character of the Beltany Stone Circle are palpable, embedded in this landscape 3.2km (2mi) south of Raphoe. The stunning panoramic view from this high hill is inspiring in itself, and overlooking the area is Croaghan Hill, where in legend the warrior Itha, the uncle of Milesius, the first of Ireland’s legendary invaders, was laid to rest in the passage tomb on its summit after he was killed in the Battle of Magh Itha, the initial foray against the Tuatha De Danaan. The allure of the site is such that C.S. MacCath’s book of poems and stories, The Ruin of Beltany Ring: A Collection of Pagan Poems and Tales, features a photograph of the stone circle on its cover. Adding to the aura of the place, to the south-west of the stone circle are the remains of a circular earthen enclosure, some 35m (38yd) in diameter. Early maps noted this as an “Old Graveyard,” but its actual origin is a mystery.6

“The importance of the Raphoe area in pre-Christian times is highlighted not only by the density of prehistoric monuments in its environs (in particular standing stones) and a widespread distribution of prehistoric artifacts, but also by the size of some of these monuments.” 7

The 64 stones at Beltany range in size from a diminutive 30cm (12in) to more than 2.75m (9ft). A raised platform inside the circle, in height from 70cm to 1m) (2-3ft), presents a chaotic topography, filled with humps and holes that are most likely the results of unscientific attempts at excavation or pillage. If the center of the stone circle once held a cairn or passage tomb, then the stones of the circle may be considered remnants of the tomb’s kerb, some leaning dramatically outward from the pressure of the raised interior or from the haphazard 19th-century excavations. 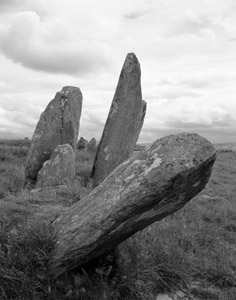 The Ordnance Survey Memoirs of 1836 noted that local lore understood that there was formerly a “vast heap” of stones in the circle’s interior, but they had been removed for building fieldwalls and other constructions. Thomas Fagan, visiting the monument in 1846, was informed that the interior of the circle covered “sepulchral graves” where decayed bones were unearthed.8

Perhaps the most significant stone is the 1.4m- (4.5ft-) tall triangular slab (photo, above left) to the ENE that contains megalithic art in the form of at least 43 cupmarks facing the inside of the circle. This stone has an alignment with the tallest pillar, in the WSW of the circle, and with the Bealtaine sun as it rises over the hill of Tullyrap, some 8km (5mi) away, marking the beginning of the season of warmth. There are three or four other cupmarked stones in the circle. There is an outlier stone, some 21m (69ft) to the southeast, which is nearly 2m (6ft) tall. This stone may have an alignment with the winter solstice (see diagram, above right).9 In some respects, the Beltany circle has a resemblance to the Ballynoe Stone Circle in Co. Down, where there also seems to be a raised mound inside the ring of stones.

With the name of the site pointing strongly to an association with the Celtic cross-quarter day of la Bealtaine, halfway between the Spring Equinox and the Summer Solstice, it was to be expected that a solar alignment would be located to confirm the connection. While this date is now associated with May Day (May 1), the actual astronomical event is normally a few days later. The word “Bealtaine” is translated as “bright or goodly fire,” and traditionally the festival was celebrated with the lighting of bonfires on hilltops and the movement of livestock to their summer pastures. It was thought that these rituals were a means of guaranteeing protection and success of the new year’s harvest.10 In a 2005 story, the Irish Times explained the enduring presence and power of the Beltany site:

“Aloof, imposing, and profoundly spiritual, this great stone circle, once a ritual or ceremonial site, is as old as Newgrange. [The stones] retain a sense of gravitas. A community chose its physical setting; subsequent generations sought its splendour. Great meetings would have taken place here. Decisions were made, disputes settled.” 11 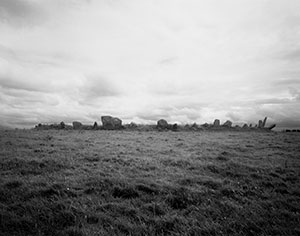 It is tantalizing to imagine that the spiritual beliefs that motivated the construction of the Beltany Stone Circle are in some way connected to the Bealtaine activities of the early “Celtic” population. With the discovery near the circle of a small half-round stone sculpted head, perhaps dated to the early Iron Age, (see photo at right), some found additional evidence of the enduring use of the site for ritual practices. 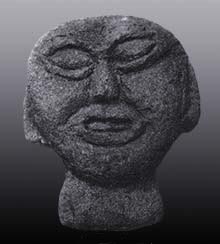 This stone head may have been venerated as an idol, perhaps a depiction of a Celtic deity. Now in the collection of the National Museum of Ireland, the Beltany Stone Head is one of seven such idols, known as the “Raphoe Group,” that have been found in the area.12 The tongue and mouth of the Beltany Stone Head have been compared with the two-faced “Janus” idol from Boa Island in Co. Fermanagh. However, as Etienne Rynne has noted, “An unskilled local stone-cutter can unwittingly fashion an “Early Iron Age” stone idol, and perhaps often has.” Rynne was writing about his discovery in 1962 of three stone heads built into the wall or gate-posts of a home 3.2km (2mi) east of Raphoe. According to the locals all three heads were carved during the 19th century by “a somewhat eccentric family of fiddlers” who, according to Rynne, more likely discovered the stone heads nearby and then claimed them as their own work.13

During the 1960s the landowner at the Beltany site discovered other prehistoric objects nearby; most significant were the two polished stone axe heads found near the circle. While these may have been contemporary with the circle, there is no way to connect their deposit with either a ritual or a domestic use pertaining to the circle.14

The Beltany Stone Circle became the focus of a modern community ritual of a sort in 2005 when the Raphoe Community in Action group organized a conference called “Rediscovering an Ancient Landscape.” Noted archaeologists and historians joined some 300 locals, accompanied by a replica of the Beltany Stone Head. Research prompted by this conference provided evidence dating the stone circle to around 3,000 BCE, adding some weight to the theory that it represents the ruins of a burial mound or passage tomb. But perhaps of greater significance to the local community, the conference served to reinforce their local identity by a few days of intense immersion in the ancient past.

“Inside the hall, the walls were decorated with posters and photographic murals created by the school children and citizens of Raphoe, who set out to explore their identity through heritage.” 15