Posted at 13:21h in Completed, Court and Wedge Tombs, featured by Howard
Share

“They were made by the Danes, and the Danes were surely small men or how would they live in those little rooms and passages in the raths? I’d have to stoop myself down when I’d go into them….”
“And when there is a marriage among the Danes they put down the land they have in Ireland with whatever else they have, for they expect to come back and to own the country some day, but whether they will or not I don’t know.”

from Legends of the Raths, as narrated to Lady Gregory, 1902 1

Drag within the image to view the Ballymacdermot Court Tomb in virtual reality.

In the Barney Murphy interview (see video, right) he seems to agree with Lady Gregory’s 1902 informant, saying the Ballymacdermot Court Tomb “was supposed to be a Danes’ graveyard, way, years ago.” 2
The fact is, this attribution of this Neolithic monument, or other ancient remains in Ireland, to the Scandinavian invaders of the island in the ninth century CE is a result of a semantic misunderstanding that has become firmly entrenched. 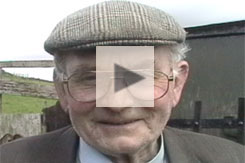 Barney Murphy said the tomb was supposed to be a Danes' graveyard (1998).

The earliest oral traditions, and eventually the medieval manuscripts, speak of the Tuatha Dé Danann, the people who in legend conquered the Fir Bolg, and who later were themselves conquered by the Millesians. Later poets re-worked some of these legends into ballads celebrating the conflicts with the Viking invaders. Thus, among the peasantry, the terms Danann and Dane became conflated, with the Danes being given the credit for the construction of the ancient monuments.3 As Dr. William Wilde (the father of the playwright) wrote in 1867:

“The opinion as to the Danish origin of these ancient structures, which has so long obtained credence in this country that it has become a ‘popular superstition,’ is beginning to fade; and will in time, as investigation extends and knowledge increases, be obliterated. If by ‘Danes’ are meant the very early fair-complexioned Tuath Dé Danann colonists, …the association may be congruous; but if by the Danes is implied the Norsemen, who commenced their invasion in the middle of the ninth century, …it is an egregious mistake.” 4

It is unclear when this linguistic confusion originated. One author, writing in 1912, insisted that the Irish had no word for Dane at all, instead referring to them as (in Irish) “black strangers” or “white strangers.” 5 The new Irish county north of Dublin, “Fingal,” is an area originally populated by the Norse. It was called by the native Gaelic “Fionn-gall,” or “”land of the fair-haired foreigners.” The people to the south, in the Viking town of Dublin were known as Dubh Ghaill, “the dark foreigners.” 6 In contemporary Irish the word for “Viking,” Lochlannaigh, is a literal translation of the term: “vik,” or “fjord”: thus, Na Lochlannaigh, or “those from the countries of the fjords or lakes.” 7

The Ballymacdermot Court Tomb contains three burial chambers in its gallery, which was about six meters (19.7 feet) long. Its D-shaped court (see illustration) is approximately seven meters (23 feet) wide and five meters (16.4 feet) long. Archaeologists believe that the tomb’s forecourt was originally open, but was at some point in prehistory closed off by extending the long arms of the cairn to wrap around the court. Was one faction of the tribe wishing to impose more secrecy on the group’s rituals? Ultimately both the forecourt and the burial chambers were blocked off with large stones, ending any further interactions of the tribe with the spirit world of their ancestors.8 In the virtual-reality view (above left) you will note that this Neolithic tomb is situated on an elevation allowing a wide view over the plain of Meigh and Slieve Gullion to the south.

In 1816 the tomb was opened by locals seeking treasure who discovered an urn containing what they presumed were human bones. The tomb was even more disturbed with its lintel stone thrown down and other pillars broken when an American army tank, veering off the adjacent road during maneuvers in WWII, ran over part of the site.9

When the Ballymacdermot site was the subject of an academic archaeological investigation in 1962, some sherds of incomplete pottery, as well a few more remnants of cremated bone were discovered.10 (see illustrations below left).

An illustrator’s reconstruction of the court tomb. (Environment and Heritage Service – Northern Ireland)

The tomb locally was known as “The Fairy Ring,” and was said to be haunted.11 If someone attempted to take stones from it for their own use, very tempting because of its position by the side of a road, they might come to a bad end. “Sur’ he saw no hurt in the breakin’ of it. But he never lived till finish it.” 12 And Barney Murphy (video, above right) tells of a man “…coming home from the town very late at night, quite possibly revved up with drink in ’em. And he said he heard music. Heard the fairies – were playing music and dancing, in on the graves.” Murphy goes on to explain that, “There was a lot of ghost stories told in them days. The ghost stories are all changed now, for the television, and the radio….because [then] there was no radio, and, sure, they had to tell some class of stories for to pass the time.” 13

Barney Murphy’s nostalgia for the old days of storytelling, before “the television and the radio” is not by any means a recent lament. It seems that each generation fears that when its oldest members are gone the ancient traditions of the countryside will vanish along with them. No doubt, with the loss of a quarter of the Irish population to famine and emigration in the mid-nineteenth century much of the local lore vanished along with the people. Fortunately, a good deal of it was recorded a few years earlier by the 1824-1841 fieldwork of the Ordnance Survey.14

In 1935, the government in the Irish Free State established its Folklore Commission to collect the traditions that remained. This later evolved into the Department of Irish Folklore at University College Dublin. Its first archivist, Seán Ó Súilleabháin, wrote in 1942:

“The entire fabric of Irish rural civilisation…is to-day as in the past beset by many enemies. Here as elsewhere the shoddy imported culture of the towns pushes back the frontiers of the indigenous homespun culture of the countryside, and the ancient courtesies and traditional ways of thought and behavior tend to disappear before the destroying breath of ‘the spirit of the age.’ We have suffered great cultural losses as a nation, and can ill afford to let pass unrecorded and unappreciated the spirit of Ireland, the traditions of the historic Irish nation.” 15