03 May Ballina Dolmen
(Dolmen of the Four Maols)

Posted at 05:59h in Completed, Portal Tombs by Howard
Share

“I personally feel sure that behind every [prehistoric] monument of outstanding character and originality…we can assume the inspiration, the ruthlessness perhaps, of some individual of extraordinary vitality and imagination.”

It is tantalizing for the modern visitor to imagine that within the folklore surrounding a particular prehistoric monument somehow, through the millennia, there remains an echo of the individual interred there.

There are a small number of prehistoric Irish monuments in which the folklore of the site refers to individuals from the historic period, after the coming of Christianity to the island in the fifth century. A megalithic tomb located on Primrose Hill above the railroad station in Ballina is one such monument. Most often called the Dolmen of the Four Maols, the tomb is also known as the Ballina Dolmen, the Table of the Giants, or The Cloghgle Portal Tomb. The monument has been greatly disturbed over the ages, with one piece, perhaps a “door-stone” left 3.5 m (11.5 ft) away from it. The site actually is not a dolmen (portal tomb) at all, but rather a “cist,” which may have been the central feature of a Bronze Age burial cairn. Its roofstone is 1.5 m (5 ft) in length, and it sits on its three supports about a meter (3.3 ft) off the ground.2 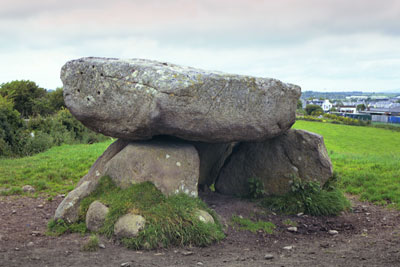 The Dolmen of the Four Maols

The story of the Dolmen of the Four Maols involves betrayal, familial loyalty, murder, and finally justice and a brutal capital punishment. How better to add some spice to the archaeological record of a megalithic monument?

Maol can mean “bare” or “bald,” but usually has the meaning of “a servant,” or “a devotee.” The four Maols were brothers: Mael Mac Deoraidh, Maelcroin, Maeldalua, and Maelseanaigh. Their foster bother was Ceallach, and it was he against whom they plotted, and murdered.

Calleach was the rightful heir to the kingship of Connaught after his father died in battle in 547 CE. He left the seminary where he was studying to return home to the throne. But when he arrived there he discovered that his cousin Colman had seized power. Calleach did not contest the crown, but instead returned to his studies and eventually rose in the ranks of the clergy to become Bishop of Kilmoremoy (now Ballina).

After Colman died the kingship passed to his son, Guaire. Concerned that Bishop Calleach would someday return to claim his rightful place on the throne, Guaire approached the four brothers and, in return for promises of land and wealth, had them murder the bishop and hide his body in the trunk of a tree.

The bishop’s brother Cu-Coingelt set out to avenge the murder. He found the four Maols, drunk, in the midst of a celebration banquet, and took them into custody. They were taken to Ardnaree (the Hill of Execution), where they were killed by the tortuous practice of quartering. But since the four brothers were of noble birth, tradition required that they receive a proper burial. So their bodies were taken across the river and buried at the dolmen now given their name.3

In his letter following a visit to the tomb, nineteenth century scholar John O’Donovan quoted a poem from the Dinnseanchus which commemorates the events:

The brave Cu-Congelt chased these long-haired youths
And seized them at the ancient Flood of Moy.
He led them captive to the Kingly Port (seat)
Which stands upon the margin of that stream
And on the Hill of Watching
hanged the four
and hence the hill received the dreadful name
Of Ard na Riagh, or Gallows Hill. The Bards
Are wont to view it and the mossy rock,
Which on the opposite hill,
Points out their grave, and tells a mournful tale.4

In 1927 one author began with the presumption that the dolmen was actually constructed for the four Maols. He then goes on to claim that the building of such megalithic monuments in Ireland continued into the Christian era and that they were the precursors to stone church buildings. “Is it not possible that the dolmens were in many cases, perhaps even in most cases, the work of the earliest [Christian] zealots? At any rate, while there is a considerable mass of evidence to connect the dolmen with Christianity, there is in reality very little to connect it with a very remote paganism.” 5

Today archaeologists understand that this monument dates from c. 2,000 BCE. Therefore, whatever the truth of the story of the four Maols, the monument clearly was not purpose-built as their tomb. It’s entirely possible that the murderers were interred under a monument that had already stood on the hill since the Bronze Age.

Another monument where the attached folklore relates to a historical figure is Dathi’s Stone at Rathcroghan, in Co. Roscommon. Ceallach, the murder victim in the present story, is said to have been a great-grandson of Dathi, the last pagan king of Ireland.6