Posted at 05:03h in Completed, Court and Wedge Tombs, featured by Howard
Share

“…it is popularly believed that ‘men were executed or sacrificed.’ This idea may be due… to the name of the monument, and to the fact that in the covering stone which rests diagonally against the ruined structure there is a deep semicircular indentation, like the place for the thumb in a painter’s palette, which perhaps gave rise to the notion that in this rested the victim’s head previous to decapitation. …There is a tradition current in Cork that ‘nothing will grow under these altars.’”

Drag within the image to explore the Altar Wedge Tomb and the holy well in virtual reality.

From the time of its construction in the late Stone Age the Altar Wedge Tomb, with its dramatic waterfront location on Toormore Bay, was the site of ritual practices that continued in the eighteenth century when the tomb was used as a “Mass Rock.” The tomb is one of a dozen similar structures in the Mizen peninsula. Located approximately 7 kilometers (4 miles) west of Schull, the tomb’s gallery opening was oriented to point directly at the cone of Mizen Peak 13 kilometers (8 miles) across the bay. 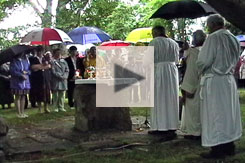 A 1999 Mass at the Tawley Mass Rock (Co. Sligo) might have occurred at the Altar Wedge Tomb in the 18th century.

There is no physical evidence that this tomb, or any Irish tomb for that matter, was ever used for human sacrifice. Yet the legend persists here, and elsewhere where “Druidical sacrifice” is part of the local lore.

When the 3.5 m (11.5 ft) long tomb was excavated in 1989 archaeologists discovered cremated human bones which were dated to c. 2,000 BCE. The tomb may be as much as a thousand years older than that. There is evidence that it was reused in the Bronze Age (c. 1,250 – 550 BCE) with shallow pits dug inside the tomb that may have been where food offerings for the ancestor spirits were deposited. Much later (c. 124 – 224 CE) Celtic peoples dug a pit that was filled with sea shells and bones of other marine creatures, including whales. These may represent a continuation of the much earlier votive practices at the site.2

The Iron Age pit may be evidence of the wedge tomb’s incorporation into the larger mythological landscape centered around Mizen Peak. This 232-meter prominence is described as the legendary mountain Carn Ui Néit, where Balor of the Evil Eye was defeated by the sun god Lugh, and beheaded:

“From this, we can understand why the wedge tomb at Altar held a special significance for Iron Age people in the locality. This Bronze Age monument was drawn into their religious beliefs, possibly as a burial place of ancestors, but more probably as an abode of supernatural powers and portal to an otherworld now conceptualised as Tech Duinn [Land of the Dead]. The marine food offerings made here in the Iron Age may have been linked to this idea of an otherworld beyond the sea, the latter regarded as the genesis of all life in early Irish mythology.” 3

Across the road from the wedge tomb is a Holy Well that traditionally was identified as “belonging to the altar.”4 It can be seen within the virtual reality environment on this page. Molly Camier, born in 1918 in a now-abandoned farmhouse near the well, said in 1998 that her mother believed the well was “from the time of the Druids, used for putting out the fire on the sacrificial altar.”5

The Holy Well was likely an important part of the clandestine Catholic rituals performed when the tomb was used as a Mass Rock during the repressive years of the Penal Laws (seventeenth – eighteenth centuries), when the religious practices of the majority population were outlawed. Catholic priests, forbidden to openly conduct the sacraments, were forced to minister to their flocks in hidden and remote locations, often using the flat surfaces of megalithic tombs as “Mass Rocks.” In doing so they brought another generation of sacred practice to a place where ritual observance began five thousand years before.